The main kidney charities have been addressing the problem of rising energy costs for home dialysis patients and have been suceessful in ensuring that all such patients are reimbursed.

For details of the roll out of the Covid 19 autumn vaccination programme , visit the Government website:

People on certain benefits are due to get extra payments to help towards the cost of living.

Details of who is eligible and the timetable for payments can be found in the following section of the Government website:

Evusheld and CKD: your questions answered

Evusheld is an antibody treatment developed for the pre-exposure prevention of Covid-19. Is it available in the UK? Are people living with kidney disease able to access preventative treatments?  Kidney Care UK have asked a panel of experts to answer your questions. 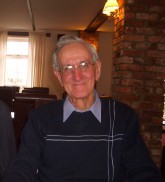 Together with his wife Jennie, Stan was a founding member of SAKA in 1975. His daughter Gillian had kidney failure and was on dialysis. Stan and Jennie together with Dr Margaret Platts the then Renal Physician decided that there was a need for a kidney patient’s organization to raise funds for research and as a support group for Kidney patients in Sheffield.

Stan was very involved with SAKA for many years and helped organize fairs in Endcliffe Park, A float for the Lord Mayor’s parade and also collecting aluminium waste for recycling. The latter was a very good money spinner as the price of aluminium was high. It entailed taking a van round one evening a month to SAKA members spread far and wide to collect the metal, which they in turn had collected from friends and neighbouts, taking the truck load to a local scrap merchant on a Saturday morning.

Stan also got involved in a case where SAKA took the Inland Revenue (as it was then) to the commissioners to claim VAT on a computer system bought by SAKA for the Renal Unit. Unfortunately they lost the case but as a result of that case the law was changed so that any items now bought by charities for sole use in medical research or treatment could be VAT free.

Stan spent many an evening with Jennie going around the area speaking and collecting donations , from Rotary Clubs, Working Men’s Clubs and Schools.

Sadly on 2nd April 2022 Stan passed away at the age of 88, he will be remembered by his family and friends as a fun and loving man who made the most of life and was always helping others.

Kidney Care UK are calling on policy makers, parliamentarians and utility companies to do all they can to help people with kidney disease who are facing huge anxiety about how they will make ends meet. 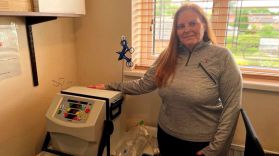 Kidney patient Dana Holmes from Doncaster has been featured by the BBC in local news on both TV and radio. She has been talking about how the cost of her electricity for home dialysis has soared.

Here is the article on the BBC News website:

In May the Government announced details of various support packages to help people struggling with the rising cost of living. This includes £400 for every household with an electricity meter as well as further payments to pensioners and people on means tested benefits.

Full details on what you should expect can be found by clicking on the following factsheet: 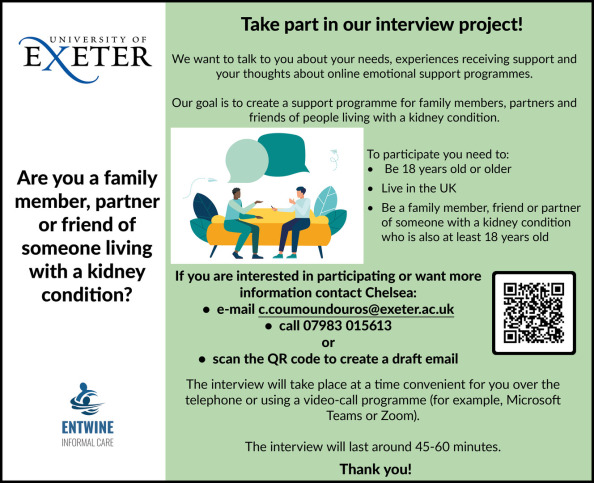 Researchers at the University of Exeter are looking for family members, partners, or friends of people living with kidney conditions to participate in an interview.

Interviews will ask you about your needs, experiences receiving support, and views about online emotional support programmes.

The results of this project will be used to understand more about what it is like to be a family member, partner, or friend of someone living with a kidney condition, and to inform the development of an emotional support programme for others like you.

Contact Chelsea at c.coumoundouros@exeter.ac.uk if you want to learn more.

To mark World Kidney Day SAKA joined forces with Sheffield Teaching Hospitals NHS Foundation Trust to hold an online event with presentations by a range of health care professionals. Click below to watch the video of this event.

You can check on the latest updates via the Kidney Care website:

For up to date information on how and where to get tests in Sheffield visit the Sheffield City Council website:

And for informtion about vaccinations:  Coronavirus - Getting vaccinated (sheffield.gov.uk)

To access the latest advice from the Government visit:

Dialysis Away From Base Survey

Travel for dialysis patients is a real challenge - arranging dialysis away from base can be daunting, difficult and time consuming. As a result, travel for most patients is very limited. As the government loosens Covid restrictions, most of the population will regain their freedom to roam. But for many dialysis patients, unless changes are made, there is a risk that life may continue to feel like a permanent lockdown.

Dialysis Away is working with the NHS and kidney patient organisations to develop solutions for improved freedom for all dialysis patients.

They would like to hear from patients about their experiences with arranging dialysis away from base and have launched a survey, which is very short and only takes a few minutes to complete. The survey findings will be used to ensure the attention of policy makers on dialysis patient freedom.

If you would like to take part in this survey, here is the link : https://tinyurl.com/Dialysis-Travel-Survey

For more details about Dialysis Away visit their website: https://dialysisaway.com

All at SAKA were deeply saddened to hear that two valued members of the kidney community had passed away in early December. May they both rest in peace.

John served as a Trustee in the early days of SAKA as well as being active in NKF.

Darren was a transplant patient and a Trustee of SAKA. He was a popular and loyal member of the Sheffield Adult Transplant Games Team and competed regularly in the Games over several years. Many people will remember him as the person who organised bookings for the seaside caravans which SAKA used to own. He was first diagnosed with cancer a few months ago but then given the all clear.Tragically he was then diagnosed with another tumour and lost his battle after a short illness.

Kidney Beam is an online service helping kidney patients take care of their physical and mental health. It offers you a way to improve your physical activity in your own home, which is especially important right now when many of you might still be wary of attending classes in person.

The online platform is hosted by specialist kidney professionals - from renal physiotherapists to renal counsellors - from a number of different NHS trusts and backgrounds, as well as people living with kidney disease. Kidney Beam is aimed at anyone over 16, with any ability, any kidney condition, and at any stage of kidney disease.

An Addenbrooke’s trial is rolling out to hospitals across the UK to see if a drug used to treat tapeworm can give high-risk kidney patients extra protection against Covid-19.

The PROTECT-V study has been running since February and now 40 more hospitals will join in to investigate whether niclosamide can reduce the number of people who become seriously ill or die.  If the trial is successful, it may pave the way for a new treatment to prevent or alleviate the impact of Covid-19 in people on dialysis, kidney transplant patients, and those with auto-immune diseases affecting the kidneys, such as vasculitis.

Kidney patients who would like to take part in PROTECT-V should speak to their nephrologist in their local centre . More information is available via https://www.camcovidtrials.net/trials/view,protectv_50.htm 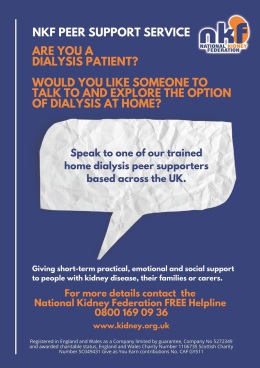 The National Kidney Federation is running a national campaign to encourage dialysis patients to consider dialysing at home rather than in a hospital. During the Covid 19 pandemic statistics emerged to show that home dialysis patients were at a lower risk of contracting the virus.

To help people make the transition NKF have launched a Peer Support service which offers short term practical and emotional support. If you would like to be put in touch with someone who has experience of home dialysis and who can talk to you about the process and share experiences, do get in touch by calling the NKF helpline: 0800 169 09 36 (9 am. - 5 pm, Monday to Friday)

NICE (National Institute for Health and Care Excellence) have published new guidelines for the care and treatment of patients with chronic kidney disease.

A joint statement from professional, patient and research kidney organisations, including NKF, particularly welcomes the changes relating to measuring the kidney function of ethnic minorities.

Click here for an explanation of the rationale for the change. 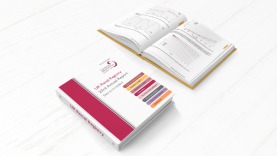 The 23rd UK Renal Registry Annual Report has been issued.This contains a wealth of data and statistics relating to chronic kidney disease.

The drive through blood testing facility has moved again (as from 5 July) and is now located at City Parkway, Parkway Avenue, Sheffield, S9 4WA.

(Use the turn off for the Pentagon car showroom) 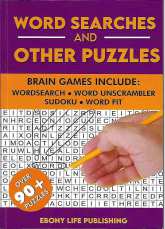 SAKA has purchased a supply of Puzzle Books to be given to dialysis patients.

We know it is beneficial to keep our brains active and these puzzles will help to pass your time during your dialysis sessions.

If you would like one and have not been offered a copy, please ask a member of staff.

We would welcome any feedback on these books, or if you have any other ideas or suggestions about what else we could do to help:

From 1 September 2021 GP Practices across the UK will begin sharing patient data. The original start date was to be 5 July, but this has now been postponed.

The new General Practice Data for Planning and Research (GPDPR) aims to reduce the burden on GP practices, allowing doctors and other staff to focus on patient care.

The NHS will share details about diagnoses, symptoms, medications, immunisations as well as your gender and ethnicity. They will not share your name and address or any written notes your GP may have.

A group of British Asian artists have come together to produce a video promoting organ donation. View below. 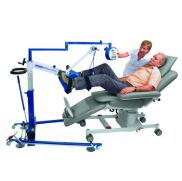 SAKA has purchased 2 specialist bikes for patients at Heeley to use whilst dialysing.

These bikes have great benefits for patients.

Haemodialysis patients generally spend 3-4 hours 3 or 4 times a week on dialysis. This equates to 4-6 weeks per year sitting or lying inactive whilst on dialysis. Physical inactivity can lead to poor physical performance, loss of bone strength, loss of appetite, muscle wasting, hypertension, fatigue and dependence. These complications are augmented in patients with kidney disease, which in itself can lead to muscle wasting and hypertension. As most haemodialysis patients spend a considerable amount of time travelling to and from and in a dialysis unit, they have less opportunity to exercise.

Exercise in the general population is associated with a number of benefits including:

There are further specific benefits noted in haemodialysis patients including: